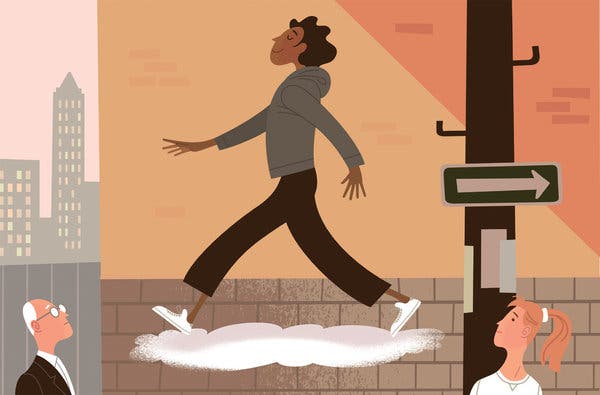 After two hourlong sessions focused first on body awareness and then on movement retraining at the Feldenkrais Institute of New York, I understood what it meant to experience an incredible lightness of being. Having, temporarily at least, released the muscle tension that aggravates my back and hip pain, I felt like I was walking on air.

I had long refrained from writing about this method of countering pain because I thought it was some sort of New Age gobbledygook with no scientific basis. Boy, was I wrong!

The Feldenkrais method is one of several increasingly popular movement techniques, similar to the Alexander technique, that attempt to better integrate the connections between mind and body. By becoming aware of how one’s body interacts with its surroundings and learning how to behave in less stressful ways, it becomes possible to relinquish habitual movement patterns that cause or contribute to chronic pain.

The method was developed by Moshe Feldenkrais, an Israeli physicist, mechanical engineer and expert in martial arts, after a knee injury threatened to leave him unable to walk. Relying on his expert knowledge of gravity and the mechanics of motion, he developed exercises to help teach the body easier, more efficient ways to move.

I went to the institute at the urging of Cathryn Jakobson Ramin, author of the recently published book “Crooked” that details the nature and results of virtually every current approach to treating back pain, a problem that has plagued me on and off (now mostly on) for decades. Having benefited from Feldenkrais lessons herself, Ms. Ramin had good reason to believe they would help me.

In her book, she recounts the experience of Courtney King, who first experienced crippling back spasms in her late 20s. Ms. King was taking several dance classes a week and practicing yoga, and she thought the stress of these activities might be causing the pain in her tight, inflexible back. But after a number of Feldenkrais sessions, she told Ms. Ramin, “I realized that the pain had more to do with the way I carried myself every day.”

Even after just one session, I understood what she meant. When I make a point of walking upright and fluid, sitting straight, even cooking relaxed and unhurried, I have no pain. The slow, gentle, repetitive movements I practiced in a Feldenkrais group class helped foster an awareness of how I use my body in relation to my environment, and awareness is the first step to changing one’s behavior.

One common problem of which I’m often guilty is using small muscles to accomplish tasks meant for large, heavy-duty ones, resulting in undue fatigue and pain.

The group class, called Awareness Through Movement, was followed by an individual session called Functional Integration with a therapist that helped to free tight muscles and joints that were limiting my motion and increasing my discomfort. Using gentle manipulation and passive movements, the therapist individualized his approach to my particular needs.

The ultimate goal of both sessions is, in effect, to retrain the brain – to establish new neural pathways that result in easy, simple movements that are physiologically effective and comfortable. Although the Feldenkrais method was developed in the mid-20th century, neurophysiologists have since demonstrated the plasticity of the brain, its ability to form new cells, reorganize itself and, in effect, learn new ways to do things.